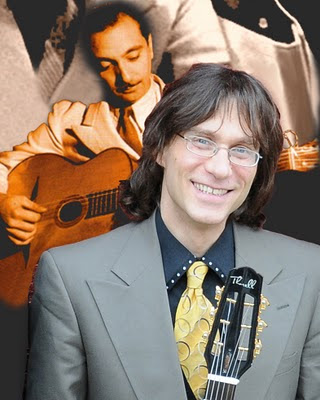 For the Times Herald-Record
Published: 2:00 AM - 01/28/11
When renowned guitarist Frank Vignola and his Hot Club band come Friday to the Rosendale Cafe and Saturday to the Ritz Theater, they will celebrate the music of Django Reinhardt. So, naturally, audiences should expect to hear works by the legendary jazz musician and composer — and maybe a 1940s standard or two, or some Mozart, or a number by Simon and Garfunkel.
Before purists cry foul, rest assured that Vignola speaks of Reinhardt with the reverence of a true believer. In fact, it's this deep respect that leads Vignola to shake up his tribute to the master with songs culled from across time periods and musical styles.
"What I admire about Django is that he would play pop tunes, classical music, folk songs of his day," Vignola said. "When I pay tribute to Django, I go in that direction. If he were alive today, he would not be playing the same things he did in 1935. He would probably have an electric guitar and play Hendrix."
Vignola's own career reflects a similar eclecticism. His love of music first blossomed around age 6, while listening to his father's records of Reinhardt and fellow jazz guitarist Bucky Pizzarelli. Later exposure to rock musicians such as Frank Zappa, however, proved just as crucial to his musical formation and career choices. While best known as a guitarist in the "Gypsy jazz style," Vignola has worked with artists as wide-ranging as David Grisman, Ringo Starr and Madonna.
As he, guitarist Vinny Raniolo, and violinist Zach Brock prepare for the weekend's shows, Vignola looks to pay homage to Reinhardt's art by connecting with his music's richness and depth, rather than resorting to simple mimicry.
"It's all about listening to the emotions (Reinhardt) has in his playing," Vignola said. "Listen to the beauty in the melody that he's playing."
He also is excited to return to The Ritz, where he performed alongside musical idol Pizzarelli in 2009. Vignola owns a home in Warwick, and eagerly awaits the theater's grand reopening once its massive restoration is complete.
"It will be really nice to have a theater where I can bring my kids to see shows," he said. "When this thing is finished, it's going to be great."