I recently reread this great article and decided to share it. At the 2009 Montreal Guitar Show, Dr. Dave Walker had never played Thorell Guitars before. We could not have asked for a more glowing critique of Ryan's guitars from such a well known guitar and music critic. 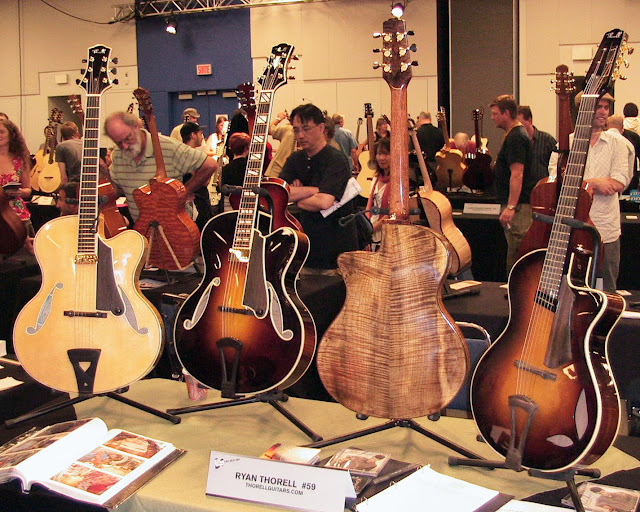 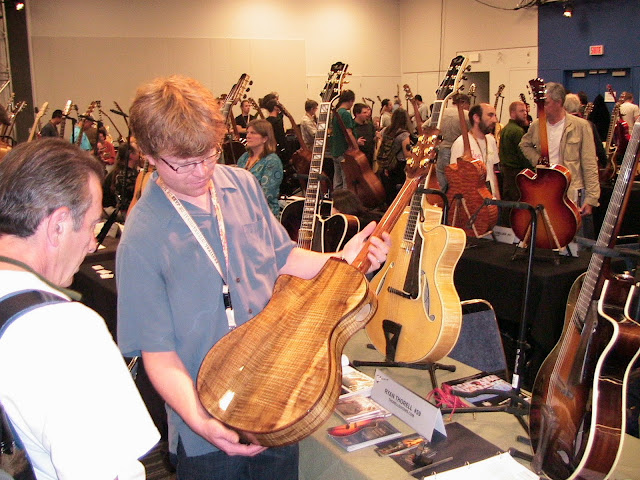 Ryan showing his new "FV Premiere" Guitar
Dr. Dave Walker posted the following comments about Thorell Guitars in his 2009 Montreal Guitar Show review on Monday, July 6th. (There is a link to the entire article below.)
With many great luthiers attending from around the world attending, Dave gave Ryan's guitars the following accolade:

"I got back from the Montreal Guitar Show late last night and tomorrow I am off to Nashville for the Chet Atkins Appreciation Society’s annual convention. Very exciting, but I have a lot to do today in a little time, so I can only share some basic impressions of the Montreal show for now.
The assortment of archtop guitars was staggering (e.g. Manzer, Benedetto, Monteleone, Ribbecke, Graf etc.), but I was particularly taken with those of Ryan Thorell. Not only did the Thorell instrument make my playing sound good, but in the hands of Frank Vignola, the instrument absolutely sings. Mr. VIgnola’s concert was a highlight of the show for me, topped only by the opportunity to chat with him and discover what a really nice person he is."

(Dr. Dave made following additional comments on July 24, 2009):
"I was so impressed with the Thorell guitars the first time I played them that I had to return to try them again to be sure my brain was not fooling with my ears. There were many great archtop guitars at the show but I found the Thorells to be something really special. The guitars certainly made my playing sound better, which did it for me, but listening to others play them I could really hear that full, rich timbre in all its glory. Last, but certainly not least for most guitarists, these beautiful instruments are AFFORDABLE - even for musicians.

You don’t have to be Frank Vignola to sound great playing one of these guitars. And of course, when you think that he switched to a Thorell from a Benedetto it tells you that these are some of the finest sounding guitars out there."

Thanks again Dave for your kind comments! Praise from someone as knowledgeable as you means a great deal to any young luthier. By the way, I know that Bob Benedetto is one of Ryan's heros along with luthiers like Tom Ribbecke, John Buscarino, and many others. 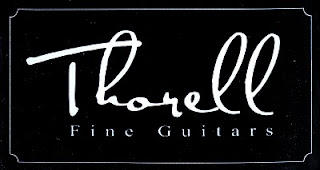