DOWNBEAT MAGAZINE - July, 2013 The Art of the Archtop/Thorell Guitars 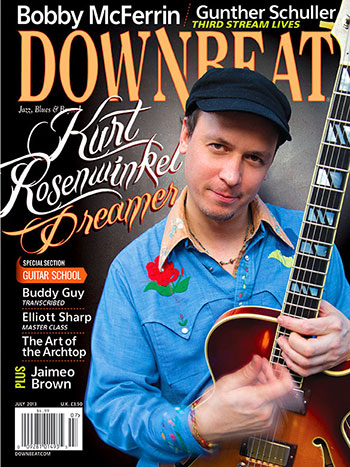 The origins of the modern guitar can be traced back hundreds, if not thousands, of years. But for many jazz players, the most important date in the instrument’s long history is 1897, when Orville Gibson introduced the first carved archtop guitar. Since then, the archtop has made an undeniable impact on the evolution of jazz and popular music. Surviving radical shifts in musical taste and huge technological advancements, this uniquely American innovation has steadily held its own and continues to maintain a fiercely loyal following among players and luthiers who appreciate its strong tradition and also understand its continually evolving and limitless potential.

Thorell
Utah luthier Ryan Thorell feels rhythm playing and note separation are the heart of the archtop guitar, which he considers to be the “sound of jazz” and “a living American tradition.” Thorell started building guitars in 1996 and carved his first archtop in 2005. He is a huge fan of the Lloyd Loar archtops and is also influenced by the New York school of D’Angelico and D’Aquisto. A true hand-builder, Thorell feels the archtop’s appeal lies in its limitless potential and ability to produce a consistent tone from the lowest to highest notes. The Sweet E and FV (Frank Vignola) are some of his better-know models, but Thorell enjoys building custom instruments that can be individually voiced for a particular player. Although he maintains a strong respect and love for the tradition, Thorell considers his craft to be a vibrant process that is constantly evolving. He often experiments with sound port placement and utilizes a subtler arch on his guitars’ tops to produce a richer tone, which he feels has become more important than generating sheer volume.

http://issuu.com/kenthorell/docs/the_art_of_the_archtop
Posted by Thorell Guitars Blog at 7:10 AM